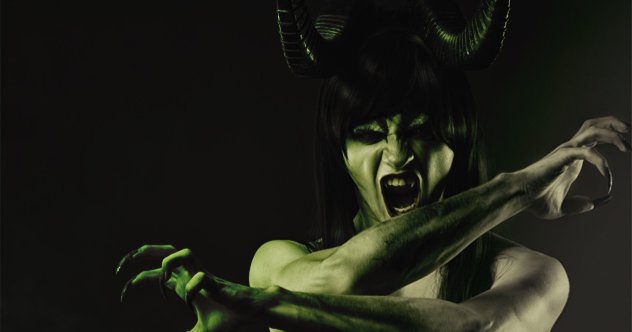 ‘Every human being is the author of his own health or disease.’

In the Navajo belief system, there resides a special type of spirit known as the Chindi. The Chindi originates as a byproduct of violence, whether accidental or during warfare. It is made up of everything that was bad about the person who died. Failing to properly honor the burial of a person can also bring about a Chindi. The Navajo do not speak of their dead, so even mentioning the deceased’s name can cause a Chindi to be raised.

In Navajo folklore, there is the belief that the Chindi is the spirit left behind after a person dies. This spirit is said to be released from the human body with the last dying exhale. It is said to represent the residual bad energy of the deceased. This spirit represents everything that was bad about this person, the Navajo have customs that ensure they do not come in contact with it. They believe if this happens it can cause a ‘ghost sickness’ or even death.

In times of illness, any contact with a Chindi can cause the person to become further sick and even death to approach quickly. To decrease the risk of coming into contact with the Chindi, the Navajo will destroy the deceased’s belongings and heed that their name is never spoken. If this custom is not followed there is the fear that the Chindi will come and make others fall ill.

To further protect against the Chindi, the Navajo tradition is to allow death to befall in the open. This is thought to allow room for the dying breath to disperse. If death occurs indoors, it is feared that the house will be forever haunted by the trapped Chindi. If this occurs, the home is abandoned or burned. This prevents the Chindi from attaching to anyone, causing someone to become ill and possibly die.

The next time you witness a mini-whirlwind of dust/dirt, pay attention to which way it spins. The Navajo call these ‘dust devils’ and believe that clockwise is a good spirit and the counterclockwise is a Chindi.

The Navajo also believe that one could use the Chindi spirit to harm others. Navajo Witches or ‘followers of the corpse poison way’ were believed to infect others with the Chindi Sickness. The Witches did this by taking a piece of the corpse and making it into a bead or powder. They would then trick the unsuspecting person by having them ingest it. It is also believed a Navajo Medicine Man could call upon the spirit world or Chindi to inflict revenge on a person they held a grudge against.

The Chindi is sometimes described as a shape-shifter that acts as a kind of evil avenging angel. It is said they can inhabit any living thing. If the Navajo sees a coyote standing on its hind legs, they know it is a Chindi. It is said any animal possessed by this spirit has ‘dead eyes’; the animal’s eyes will not reflect light back. These animals are avoided by all Navajo. It is stated if a Chindi is set against a person their only defense is to say a prayer. Navajo’s create a medicine circle around them and sing or state a prayer out loud. It is pointed out the most important thing is a person’s attitude. If you have a ‘good heart’ and respect all of Mother Earth’s creatures, the negative energy of the Chindi set against you will just bounce off and return to the person who tried to inflict it.

Sometimes the Chindi would even terrorize an entire family for decades, as in the case of the Long Salt family, who were tormented for over 100 years. The Long Salt family are a Navajo clan that was cursed by a Chindi set upon them. This case is well documented.

The families’ ordeal started in 1825. One family member became ill when he could not sleep and he started having nightmares. The angry spirit of a man he had killed was tormenting him because he was slain before he could sing his death song.

The man’s brothers told him not to worry because he had killed this man in a fair fight, recognized by the tribe. The man felt he would surely die if something was not done to appease this troubled spirit.

The Long Salt family sought help from an old blind priest. This priest then held a 3-day b’jene or sing over the afflicted brother. On the final day, he stated his gratitude because the Chindi had departed and he now could sleep peacefully. The old priest requested the Long Salts butcher 5 sheep for him as payment. His request was fair for the powerful Long Salt Clan numbered in the 100s and had many sheep.

The two Long Salt men who were assigned to slaughter these sheep had other ideas. The old priest’s village was a considerable distance from their flocks so taking a short cut they butchered 5 wild antelope instead. They felt the priest being blind would not know the difference. The elder Long Salt that presented the 5 carcasses to the priest was also unaware that antelope had been substituted for the sheep.

A few weeks after the payment an older member of the clan died suddenly even though he had not been ill. Then a young male died for no reason. As the Long Salt members and young widow mourned these deaths in song they began to feel something was not right. A pattern of death began to emerge.

Every few weeks another member would become ill, waste away, and die. It became obvious to the wiser members that a Chindi had been set against them. Why? The two men who had substituted the antelope finally came forward and confessed. The family council agreed that they must ask the old priest how they could rectify the situation.

The old priest told them he had become angry when he discovered the deception. He acknowledged that he had set a Chindi against them, its task was to eliminate them one by one. They explained they had not meant to cheat him. They begged him to call off the avenging spirit. The old priest believed they were sincere. The Long Salts told him they would pay whatever the price. The old priest sent them away stating he needed to figure out what a proper compensation would be. He told them to return in 10 days.

When the Long Salts returned, they were informed the old priest had died. They asked his son if he knew if his father had called off the curse before he died. To their horror, they were not able to determine if the curse had been lifted. By the time they returned home, several members of the family lay ill and dying. The last remaining Long Salt member died in 1928 from the Chindi Sickness.

Think you’ve seen or felt a Chindi? Some reports suggest that a Chindi can inhabit the body of an animal, and one form it might choose is a passing wolf or coyote. As with so many Native American beliefs, details about the Chindi are hard to pin down because very few people wish to speak of them. If you do suspect you are facing a Chindi, you might try drawing a sacred circle around you and pray, it may save your life.

Can you defend yourself from the Chindi?